A special election planned for March 3 might be of unusual interest to Indianola’s elementary students.

One of the items on the ballot will be a Public Educational and Recreational Property Tax Levy, known as PERL or “the playground levy.” The Indianola School Board voted unanimously at its Jan. 13 meeting to take it to a public vote.

“This is the same public education/public recreation levy that we’ve talked about, and the allowed purposes are for playgrounds — sometimes it’s called ‘the playground levy’ — and then community education,” Superintendent Art Sathoff told the board.

The other item for voters’ consideration will be a Revenue Purpose Statement. If approved, it would update how local option sales tax revenue may be spent, to match what Iowa law now allows, including paying for security measures.

As for PERL, the maximum allowable levy amount would be 13.5 cents per $1,000 of taxable valuation, although the school board would determine each budget year whether to levy the full or a lesser amount. 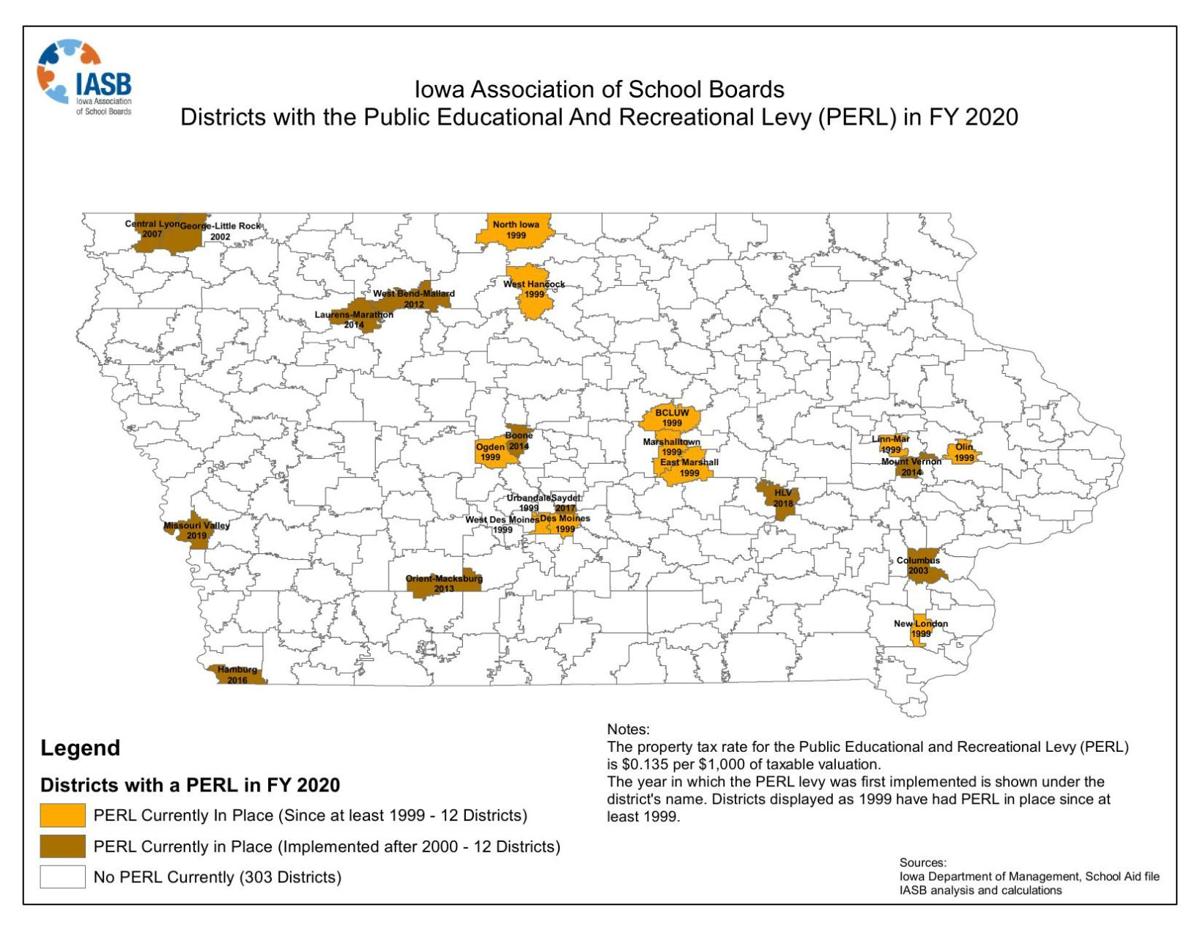 The levy would remain in place unless the board, or a majority of voters, were to rescind it. PERL may also come to an end when there’s a reorganization of school districts in which one district has the levy and another does not.

According to district leaders, this levy would create a “sinking fund” to pay for the large, and regular, cost of replacing playgrounds.

For instance, all four of Indianola’s elementary schools have received new playgrounds since 2014 at about $500,000 per location. But even an investment like that is relatively short lived, thanks to safety guidelines.

“I’d say roughly 10 to 12 years, depending what inspections show,” Sathoff said of a playground’s lifespan.

A bond issue funded the Whittier Elementary playground in 2014, as well as the Emerson and Irving playgrounds in 2015. The local option sales and services tax (Secure and Advanced Vision for Education, or SAVE) paid for the Wilder playground in 2019. Parent-teacher organizations have also helped with costs.

Rob Keller, the board president as well as a local businessman, said after the meeting that PERL makes better sense from a financial standpoint.

“PERL allows our school district to strategically save for a specific purpose,” he explained. “PERL funds are required to be spent on two items: playgrounds and/or community education. These items can benefit the greater Indianola community in the areas of recreation and education.”

NOT A TAX INCREASE

Typically, approving a tax levy means a tax increase, but district leaders don’t foresee that being the case with PERL.

“We don’t anticipate this being a tax increase. Our tax levy went down 80 cents this year, and we don’t think we’re in a position where we need to increase taxes, so we can put this levy in,” said Sathoff.

The decrease in the tax levy was possible thanks to a combination of valuations increasing and the district levying fewer cash reserve dollars.

"We can also have adjustments to the Management Fund and Debt Service Fund year to year," Sathoff said.

A simple majority vote on March 3 would get PERL started in Indianola.

And the potential boon for the school district? Had it been in place last year, for example — based on property valuations at the time — it would have brought in up to $120,000, according to Johna Clancy, school board secretary and the district’s business official.

Its use for playground replacement may be straightforward, but the possibilities for public education and recreation are wide open.

“These are just ideas at this point,” Sathoff said.

The board discussed possibly speaking with officials from current PERL districts to learn more about how they’ve used levy dollars. Indianola School Board members who serve on a communication subcommittee also will create an informational flyer for Indianola voters.

PERL's potential is exciting, says district leaders, but at its core, it's about practical budgeting for the district.