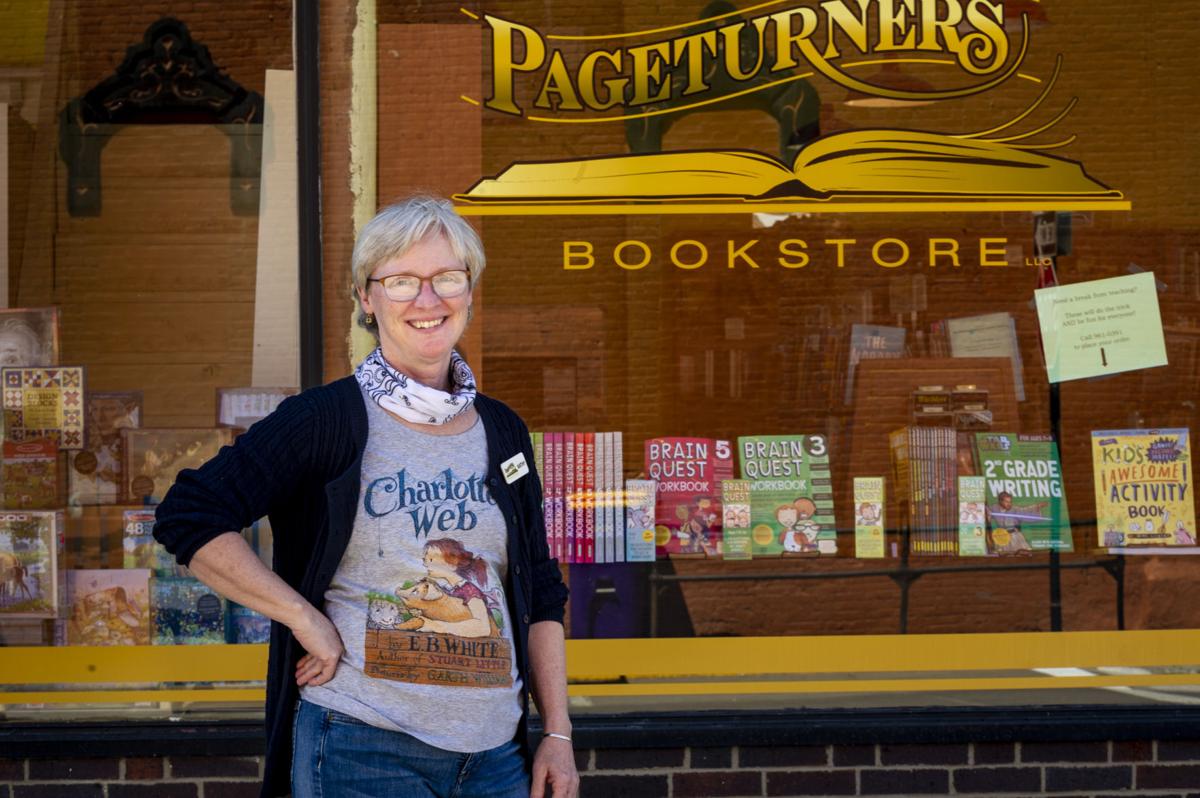 Kathy Magruder of Pageturners said she doesn't plan to reopen to customers right now, but is expanding her curbside pickup program. 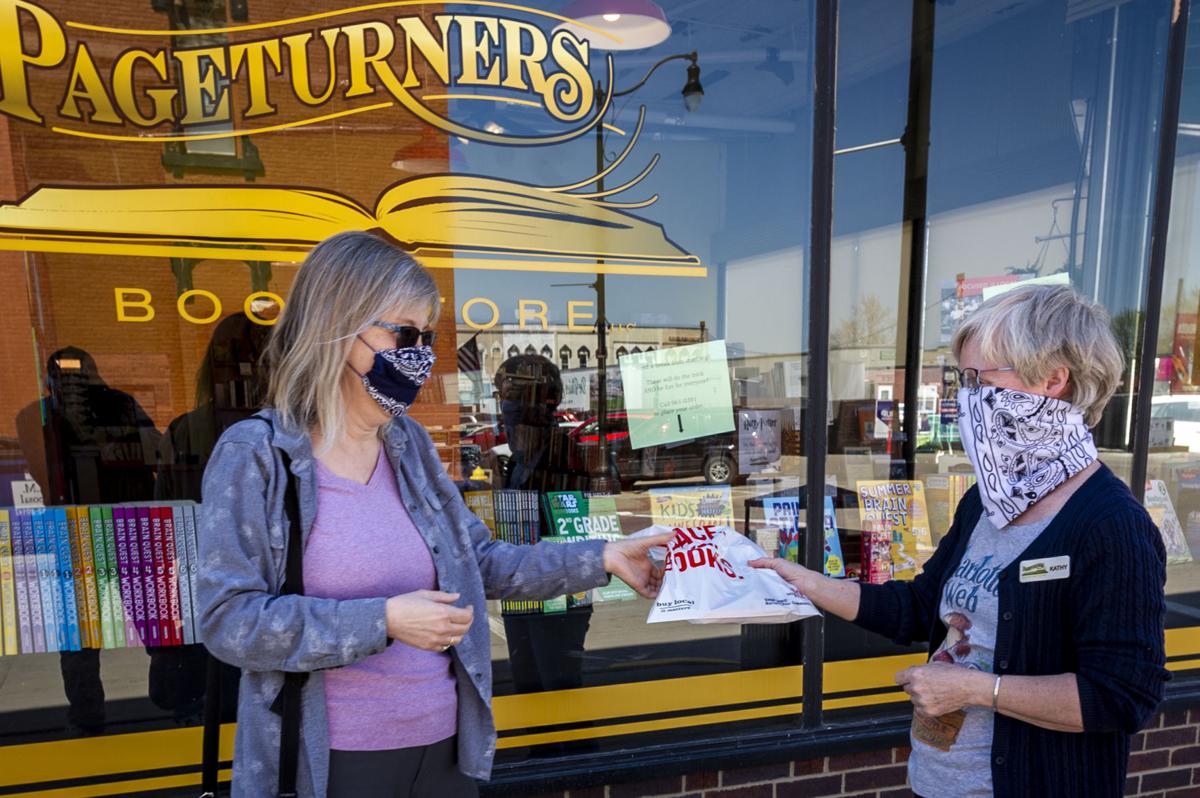 Carolyn Brodie of Indianola picks up her book order from Kathy Magruder at Pageturners in Indianola Thursday. Magruder said she doesn't plan to reopen to customers, but is expanding her curbside pickup program.

The Indianola Independent Advocate is providing this story for free so that all readers have access to this important information about Indianola's response to the coronavirus. Click here to subscribe and receive all the Indianola news.

While Gov. Kim Reynolds announced Monday that restaurants and businesses could reopen and churches resume in-person services, a number of Indianola organizations say they aren’t ready to take her up on her offer — and neither, they say, are their customers.

Crouse, which closed completely after the governor’s original shut down, isn’t the only restaurant choosing not to reopen yet. Funaro’s, on the opposite side of the Indianola Square, will be sticking with its carry out and online business for now, said Bryant Houston, the owner of the deli.

Houston cited the unknowns of the situation as one reason for continuing unchanged. “Who knows if they won’t shut it down again next week?” he asked. At the same time, the new version of his business is doing well.

“This is something I’ve been working for — the online ordering and delivery,” he said. “They closed us on Tuesday and by Thursday, we had it going. It kind of gave me the booster I needed to get it done.”

Houston admitted that the closure at first was frustrating. “When it first started, I was cussing,” he said. But now? “It’s definitely working for us.”

Other local restaurants, including Sports Page and Brick House Tavern, say they will stick with carryout services while figuring out what it will take to reopen safely. That was a point that Brenda Easter, president and CEO of the Indianola Chamber of Commerce, emphasized Wednesday during a call with local merchants on reopening.

“Just because they say you can open on Friday, are you really ready to open on Friday?” she asked. “Will you be more ready on Monday?”

Easter reminded businesses that the reopening proclamation includes a number of requirements, including disinfecting surfaces, limits on capacity, social distance and providing personal protective equipment for servers and staff. She advised businesses to create 30-day, 60-day and 120-day plans for their needs if they reopen, and then plan for those plans to change.

“The 30-day plan could be a 15-day plan, because on May 15 we expect new announcements,” she said. Plans should include how businesses will obtain the equipment they need to reopen, she added.

That was a factor in Joe and Amanda Ripperger’s decision not to reopen Sports Page Grill or Brick House Tavern right away.

“We need to gather sanitation supplies, PPE supplies for our staff, reorganize our restaurant seating arrangement to ensure social distancing standards and carefully write procedures of how this next step will look,” they said in a social media post.

Kathy Magruder of Pageturners Book Store said she will expand her curbside delivery of books rather than opening her store right away, expanding hours to 10 a.m. to 5 p.m. Monday through Friday and adding hours on Saturday. She said within minutes of posting her decision, she had phone calls with orders for books.

“We’ve been extremely busy,” she said. “People seem to be responding really well to us deciding not to open right away.’

She said she wanted to see the number of COVID cases decline before reopening. Indianola has six cases in town, while Warren County’s case load has crept up to 22. But the number of cases state-wide has continued to climb and Polk County is one of 22 counties that remain under restrictions.

“If we were open, how many people who are sick to death of being shut-in in Polk County would decide to drive down here?” she asked. “I’d prefer to keep us all as safe as possible.”

Are your favorite haunts open for seating or have they decided to remain closed? Find out below.

Not open for seating. Extended curbside hours for pick-up service of their full menu.

Lobby closed until May 15. Drive-in open.

Open for indoor and outdoor seating. Will continue to offer curbside, carry-out and delivery services.

Open for dine-in, curbside and carryout.

Dining room to open Wednesday, May 6. Carry-out and delivery available.

Not open for indoor seating. Extended curbside hours for pick-up service of their full menu available.

After reading the article on our Indianola businesses, I wanted to add a little something I experienced on May 1st, with Page Turners bookstore. My elderly mother resides in a retirement community in Central Florida. All of her activities have long been cancelled and she’s holed up in her little 1 bedroom apartment. An avid reader, with no library, she’s been working her way through several books a week, which I’ve had shipped from Amazon. And then I remembered our little town bookstore has used books! We ordered 25 paperbacks, which they offered to ship to her!!! Happy momma, happy daughter. Thank you, Page Turners, for going above and beyond! B. Engley

I was heartened to read these words which evidence our business community acting with workaday wisdom:

" . . .local restaurants, including Sports Page and Brick House Tavern, say they will stick with carryout services while figuring out what it will take to reopen safely. That was a point that Brenda Easter, president and CEO of the Indianola Chamber of Commerce, emphasized Wednesday during a call with local merchants on reopening."